My name is David Evans and the idea of quirky nicknames and alter egos makes my blood run cold.  I knew a guy called Graham in university who made everyone call him ‘Hash’.  Everyone thought Graham was a tosser.

When, around 1998,  the computer I was using at work arbitrarily decided to refer to me as ‘Dev’, it was obvious that it would stick. Given I was the third David to join a team of six guys, some of who were three times my age, I needed to find a simple name they could call me by that wasn’t Dave (already taken), or anything too offensive to my Welsh heritage.

So when I started out in PR two years later – and found my new boss was called (you guessed it) Dave – we agreed to try ‘Dev’ on for size and the rest is history. 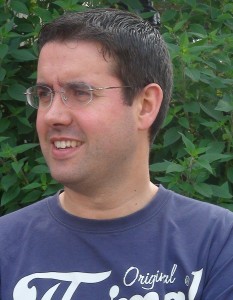 Since then I’ve hustled a thousand journalists, written a million articles and been part of some really cool content from voicing comedy cartoon characters and ripping off Hollywood movie blockbusters, to nutting out winning websites and creating intelligent sales collaterals.  I’ve travelled the world and now I’m back in Cardiff with my wife, two beautiful daughters and a pair of guinea pigs whose guts I hate.

Today I’m the creative driving force behind content development for a bunch of disruptive, interesting and challenging technology businesses.  In a lot of IT circles of course, Dev means Developer or Development.

And that’s what it means here too.

Your way to great content for business marketing, communications and PR